Bach Flower Remedies were developed in the early 1900s by Dr. Edward Bach, an English Physician. While originally developed for humans, these flower essences also work beautifully on animals too! Dr. Edward Bach was a highly respected physician in London, England. Despite his successful work in medicine, Dr. Bach became increasingly dissatisfied with the way […] 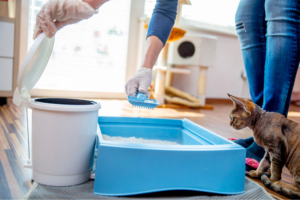 Cleaning cat urine and controlling cat litter odor in a multiple cat household can sometimes be quite a challenge. When you have lots of cats, chances are, at some point, you will experience issues with litter box avoidance or inappropriate elimination. Cat urine and cat urine odor can be quite difficult to deal with. Once […]