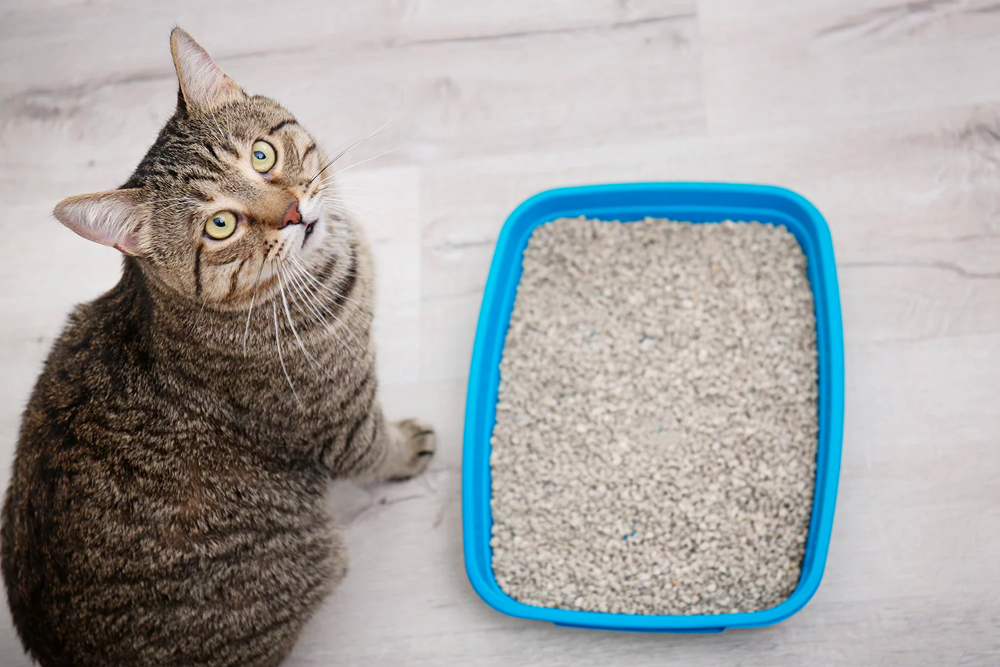 Choosing cat litter can be overwhelming! There are hundreds of choices available all claiming to be the best thing ever.

There is the basic clay litter, clumping litter, litter made from newspaper, corn, even wheat. Some are granules like sand, some that are crystals or contain crystals, and still others that are pellets of litter. So how do you know what your cats will like? Bottom line – you don’t.

Choosing a litter for your cats is often a case of trial and error. And with lots of cats, some may like it and others may refuse to use it. And what we as cat owners want in a kitty litter may conflict with what the cats want.

Most cat owners want something that has good odor control, is easy to clean, has very little dust, and isn’t too expensive. What most cats want is something that feels good to stand on, is easy to dig in, and doesn’t smell like anything.

We have tried many different types of litter over the years with both good and not-so-good results. Here are some of the most common types.

Pellet Type Litter – An example of this is Feline Pine. The litter is shaped like oblong pellets. It absorbs very well and is dust-free. The cats found it difficult to dig in and most of them refused to use it. The pellets tended to fall apart after soaking up urine making it difficult to clean up. This meant that the entire box had to be changed more frequently which ultimately made it more costly.

Non-Clumping Clay Types – Johnny Cat is an example of this type. This was the first type of litter marketed to cat owners. It is absorbent and the cats seem to like it fine. It is incredibly dusty and hard to keep clean, however, requiring frequent whole box litter changes. On the plus side, it is the least expensive of all the litter. We use this type in our outdoor litter box.

Crystal and Crystal Blend Types – Tidy Cat Crystal is one example. These contain odor-absorbing crystals. Our cats tolerated the blends (those with crystals and clay litter) but shunned the all crystal type. We found these to provide too little benefit for the cost and the odor control was no better than our normal cat litter.

Clumping Litter – By far the #1 choice of litter for both cats and owners. There are numerous brands of this type of litter. The sand-like consistency makes it soft and easy to dig in for the cats. Once wet, it clumps into a ball making it easy to scoop out the waste leaving fresh, clean litter behind. However, because of the many brands of clumping litter available, it took us a few tries before we found one that all of our cats consistently liked. (More on this shortly.)

When choosing a litter for your cats, be sure to get one that is unscented. Many litters are highly scented to help with odor control but often, this flowery scent is overpowering to a cat’s sensitive nose making her not want to use it.

The best way to control odor is to have a litter that your cats will use (instead of your carpet!) and to keep the litter boxes clean. Scooping the boxes at least daily (or better yet, twice daily) will keep the box odor-free without flowery perfumes.

The clumping litter that is designed specifically for a multiple cat household makes extra hard clumps for easier scooping. The clumps are very hard and don’t fall apart. We liked it but noticed that some of our dainty cats didn’t like digging in it. Some stopped digging a hole and would just go on top. They also stopped covering their waste.

Dr. Elsey’s Ultra Precious Cat clumping litter for multiple cats. We were amazed at how quickly our cats took to this litter!

We were having an issue with 2 of the cats going right outside the litter box instead of in the box like they are supposed to. The day we first used this litter, the problem resolved itself!

This meant that all 15 cats (at the time) preferred to share a dirty litter box than to use a clean one that didn’t have the Precious Cat litter in it! They didn’t even have outside access at that time either! What a testimonial from our cats!

We went out that day and bought as many bags of Dr Elseys Ultra Precious cat litter that we could find and filled as many boxes as we could with it. It took a couple of weeks to get all of the litter boxes changed to the new litter. We have not had a problem with a cat refusing to use the litter box since we started using this litter. Even new arrivals have taken to it right away.

UPDATE – Recently, we went to get cat litter and the store was out of our kitties’ favorite, Dr. Elsey’s Precious Cat! We decided to try another type of litter just to see how the cats liked it. We purchased a couple of bags of World’s Best Cat Litter because we had read some good things about it. It is all natural and made from corn. We filled a box with the litter and waited to see what happened. Initially, no one used it. We added some litter attractant and while some of the cats did use it, they all still preferred the Precious Cat. It could be just because it was new that they didn’t use it but we suspect they just didn’t like it as well since they took to the Precious Cat Litter right away.

We also didn’t care for it much. It is very dusty and to us it smelled a bit like damp sawdust. The biggest drawback for us was the cost! An 18# bag of litter cost well over $20.00! The Precious Cat only cost around $12.00 – $14.00 for a 40# bag – big difference! That being said, it is worth a try if you are having litter box problems with any of your cats. We would be willing to pay the extra money if the litter solved any “outside the box” issues. For now though, we’ll be sticking with the Precious Cat Litter! – END UPDATE

Initially, when we get a new cat, we worry that they will not use a litter box. During their confinement period when they first arrive, they are in a room with their own litter box filled with Precious Cat litter. We add Dr. Elseys Precious Cat Ultra Litter Attractant

to the litter in the box just in case they need encouragement to use a litter box. Except for a cat that was too ill to get to the box, we have never had one refuse to use the box even though, with a few, we suspected they had never used a litterbox before.

Once you find a cat litter that your cats like, it is important to keep using it. Cats don’t like change and changing the type or brand of litter in all of the litter boxes too often can make them stop using their boxes.

Hopefully, you have read our section on Cat Litter Boxes

and have them ready to go. Fill the boxes with about 4 inches of kitty litter. Initially, this will require quite a bit of sand but ultimately this amount will help to keep the boxes cleaner.

This amount of sand will allow the deep diggers to dig to their heart’s content without reaching the bottom. This way, you won’t have a problem with urine sticking to the bottom of the box which makes it harder to scoop out completely and harder to keep the box clean and odor-free.

Ultimately, the choice of cat litter (as with cat litter boxes) is up to you and your cats. After all, the best cat litter is the one that your cats will use regularly and faithfully!